All across the world, St Patrick’s Day is celebrated with parades, parties, and, of course, plenty of green! While it’s easy to get swept up in the festivities and lose sight of the real meaning behind this annual holiday, there are some symbols associated with the holiday that can help you stay grounded in its traditions and history. Read on to learn more about five St Patrick’s Day symbols and their meanings.

There are many legends and myths about where the Irish shamrocks originated. But one that has endured for many years comes from Ireland’s St. Patrick, who used it to teach about his faith to pagan Irish people.

Legend has it that he fashioned three shamrocks out of water reeds and told his students they represented: The Holy Trinity (Father, Son, and Holy Spirit).

The metaphor worked so well for the Irish that they have worshipped many triple deities until the modern-day.

Without a doubt, Shamrock has come to be Ireland’s national symbol since the 18th century. Besides the deep meaning in Christianity, the clover has three leaves for a reason: Each leaf represents hope, faith, and love.

The leprechaun has nothing to do with Ireland. In fact, its origins can be traced back to England and Wales.

It starts from the fact that Ancient Ireland was inhabited by two groups of people, known as Gaels and Picts. While many symbols of today’s Irish culture were adopted from Celtic history and mythology, one that is widely used on St. Patrick’s Day is more likely a result of English colonization.

That being said, Leprechaun originally comes from an old English word for little man, making it a fairy-tale version of a troll or gnome (or maybe even JRR Tolkien).

It’s believed that leprechauns became associated with Irish folklore after settlers brought over their folktales.

The St Patrick’s Day Rainbow is said to symbolize God’s promise that there will never be another flood that destroys life on Earth.

Since rainbows usually form after storms, it is also believed that rainbows appeared after St. Patrick drove away snakes from Ireland.

Besides, in Irish folklore, the rainbows are caused by fairies sprinkling dew into rivers and lakes so they can catch fish for feasts. The myth tells that there’s a Leprechaun holding a pot of gold at the end of the rainbow as well.

The story goes that St. Patrick had a vision of a herd of wild animals coming towards him during his time in Ireland. To ward them off, he lifted his staff over his head, and it miraculously turned into a flock of blackbirds which scared away all of the animals in sight. He kept some of these blackbirds for himself as pets but gave many more away to convert pagans to Christianity—which may explain why people have associated blackbirds with good luck ever since then.

Traditionally, Irish people will place one coin at each windowpane or at their door on St. Patrick’s Day to tribute St. Patrick and his gift of converting pagans. These are called St. Patrick’s Pence or lucky money.

Once someone receives lucky money, they should use it to make themselves feel lucky throughout St. Patrick’s Day, thus perpetuating its luckiness all day long. 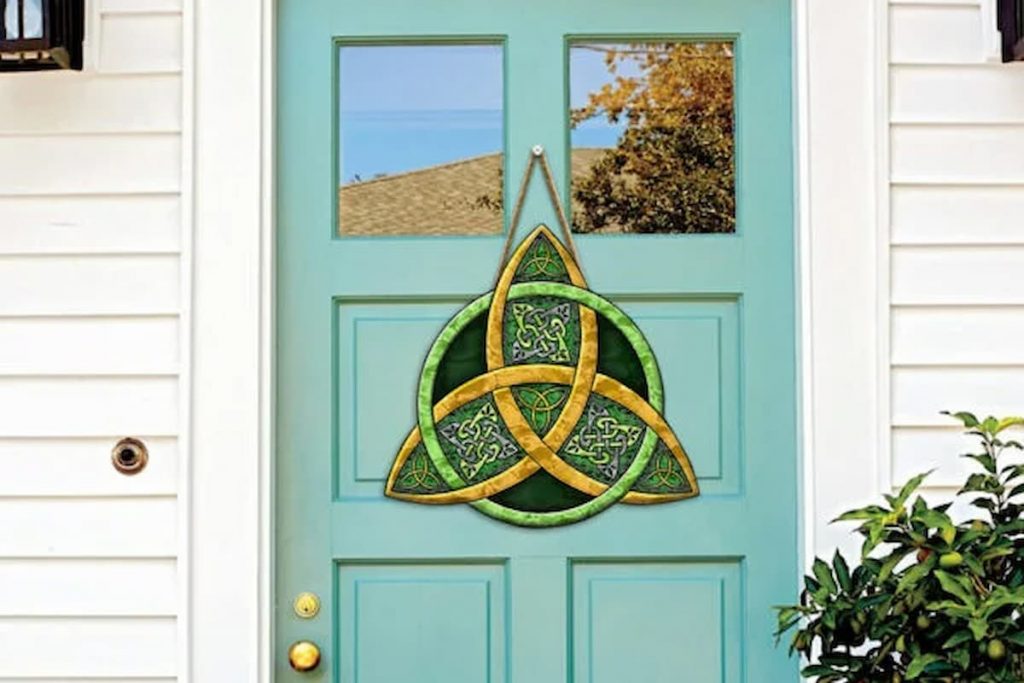 The Trinity Knot, or Celtic Triquetra, is a popular symbol of St. Patrick’s Day. Sometimes referred to as The Endless Knot, it is believed to be a representation of one god in three parts. The circle surrounding it represents wholeness or unity with all living things.

Today, some Christians wear trinity knots as a symbol of their faith. Some also hang the symbol on their house’s front door as the sign to celebrate St Patrick’s Day. Others incorporate the Celtic Knots in their tattoos, artwork, Saint Patricks Day flags, etc.

Get Inspired by The Symbols of St Patrick's Day

What Are The Irish Traditions For St. Patrick's Day?

St. Patrick’s color of choice was blue, but he probably would have worn green if it was available in his day. The color represents Ireland—and Irish heritage—and is universally recognized as one of St. Pat’s symbols.

The wearing of green on March 17th dates back to at least 1571 when Ireland’s Trinity College held a celebration for all students who graduated on March 17th during Holy Week (the week before Easter). All attendees wore green caps and gowns to honor St. Patrick’s efforts in bringing Christianity to Ireland.

Perhaps one of the most well-known St. Patrick’s Day traditions is a parade. Specifically, a green-colored one that usually involves plenty of beer, bagpipes, dancing, shamrocks, and other elements that play up an Irish theme.

While it’s not clear exactly how parades got started (or when), they were already popular in Ireland during St. Patrick’s lifetime. Some people believe he might have instituted them himself as a way to keep young men busy on festival days. During his four-decade stay in Ireland from roughly 432 to 461 CE, St.

If you are in Ireland on St Patrick’s Day, you can’t miss listening to Irish music. The traditional music of Ireland has played a central role in Irish identity for centuries, as it expresses both regional and national character. For some people, to listen to Irish music is like an invitation from St Patrick himself.

Legend has it that St. James first brought Christianity to Ireland in the form of a dark brew made from roasted barley seeds. It’s easy to see why Guinness would come to represent Irish heritage in some circles. Without it, there probably wouldn’t be many green clothes or even parades on St. Paddy’s day!

In fact, Guinness has such widespread appeal as an Irish symbol that non-Irish people often buy it for festivities like St. Patrick’s Day instead of drinking domestic beers.

Ireland is famous for its wide variety of fantastic food, which can add a little fun to your St. Patrick’s Day festivities. Of course, traditional dishes like Irish stew (made with lamb) or colcannon (mashed potatoes mixed with cabbage) are great options if you want to pay homage to Ireland itself.

If you aren’t feeling quite so adventurous, you can always have some corned beef and cabbage, which is one of America’s most well-known St. Patty’s day foods. It was first brought to America by Irish immigrants fleeing famine in Ireland in 1845.

So now you know the meanings of all St. Patrick’s Day symbols. Additionally, we have also given you the necessary information about Irish traditions on this festival.

We hope this post has piqued your interest in this day. And, best of all, if you’re looking for ways to decorate your home for the upcoming March 17th, these symbols are sure to inspire you.