The Meaning & History of the Irish Shamrock

The Irish shamrock, or trefoil, is associated with St Patrick’s Day and Ireland’s patron saint. The three-leaf clover symbol also represents the Holy Trinity and has been used by the Irish since early Christian times.

But how did it become so closely linked to St Patrick? When did this unique leaf pattern first appear? And why did the Irish choose it to represent their country? Keep reading to find out more about the history of this Celtic shamrock and its significance on St Patrick’s Day.

A Brief History of The Irish Shamrock & Its Spiritual Meaning

The Irish shamrock’s history is intertwined with Saint Patrick’s. Around the fifth century, he was the one who brought Christianity to Ireland. According to legend, St. Patrick used a 3 leaf clover as a metaphor for the Holy Trinity while preaching Christian doctrines to the Celts on the island of Ireland.

People believe that preaching to the Celts became more accessible due to this simple method. That’s because the number three, or the shamrock plant, had already taken on significant meaning for the Irish by that time. Before learning about Christianity, people used to believe in some Triple deities in their indigenous folk beliefs.

Most importantly, because of the miraculous actions he performed, St. Patrick was able to successfully reform the people’s faith. He drove snakes out of Celt territory, for example, while holding a staff in one hand and a clover branch in the other.

Although Ireland is commonly associated with Saint Patrick, he didn’t actually come from Ireland. He was born in Roman Britain in 387 AD. Shortly after his birth, his family is said to have been captured by slavers who took them to Ireland. Slavery was common throughout Roman Britain at that time, so it’s believed that they were already slaves before they even reached their destination.

Regardless, St. Patrick managed to escape after six years and went on to live a much better life as a priest in England for another 30 years. But then he felt like God wanted him to return home. Thus, he traveled back to Ireland as an ordained bishop around 432 AD with a mission: To eradicate paganism.

The reason behind St. Patrick’s choice to use a shamrock to explain his Holy Trinity is because of its triple nature. Each leaf represents God, Jesus, and the Holy Spirit (or Father, Son, and Holy Ghost). That makes sense — that’s why shamrocks have been symbols for Ireland for over 1,000 years.

But did you know that the Irish clover has even more profound meanings? They can also represent faith, hope, or love (as in God’s infinite love).

How Did It Become The National Symbol of Ireland?

Initially, the Shamrock was only associated with Saint Patrick and had religious connotations. However, as more people recognized the symbol’s incredible meaning in their lives, it became a famous symbol in Ireland. And soon, it was being adopted as the official national symbol of Ireland in the 18th century.

The green clover was first used during turbulent political times in the late 18th century. During the war against France and Spain, Irish militiamen used it to symbolize medals, coins, uniforms, instruction boards, and Volunteer flags. The Irish used Shamrock green as a revolutionary color as well. This symbolic plant is also mentioned in several songs to commemorate Irish soldiers’ courage in the battle to protect the country from the enemy siege.

Since the nineteenth century, the Shamrock has grown in popularity in Ireland and many other countries such as France, the United Kingdom, and the United States. Regardless of where it appears, this symbol refers to the history of a saint named Patrick and the representation of a republic known as Ireland.

The Difference Between Shamrock and 4 Leaf Clover

To start with shamrocks, you probably think that they’re cute tiny plants mostly seen during St. Patrick’s Day. However, the shamrocks are actually clover and have three leaves in them.

The word shamrock originates from the Gaelic word seamrog, meaning “young clover.” Both shamrock and four-leaf clover belong to the genus Trifolium. According to studies from biologists, the first generation of the genus was the shamrock. At the same time, the four-leaf clover was just a mutated variant that appeared later.

Since the four-leaf clover is so rare compared to the three-leaf (or shamrock), people are often confused and think these are two completely different plants. However, as explained above, they are completely the same but differ only in the number of leaves for each.

What really makes this distinction interesting is that the fourth leaf of the clover is thought to bring good luck (for its rarity). The remaining three leaves retain their traditional meaning as a shamrock: Faith, hope, and love.

With that in mind, Flagwix has made some St. Patrick’s Day flags and signs inspired by the three-leaf shamrock (Buy them soon because we’re opening a big sale until March 17). Have a look! 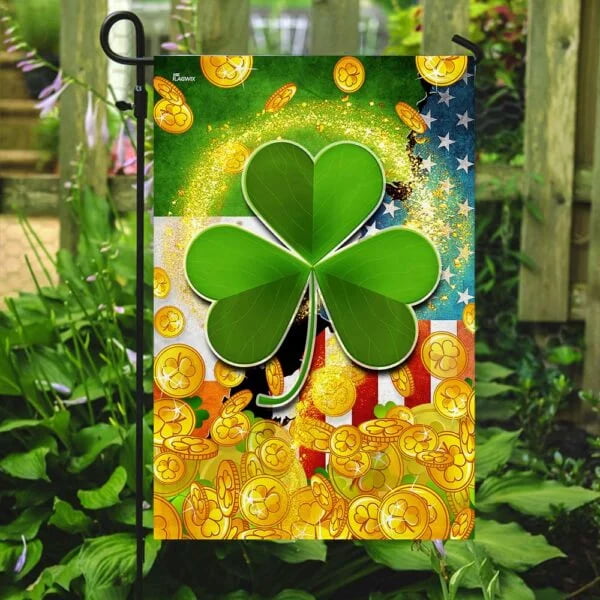 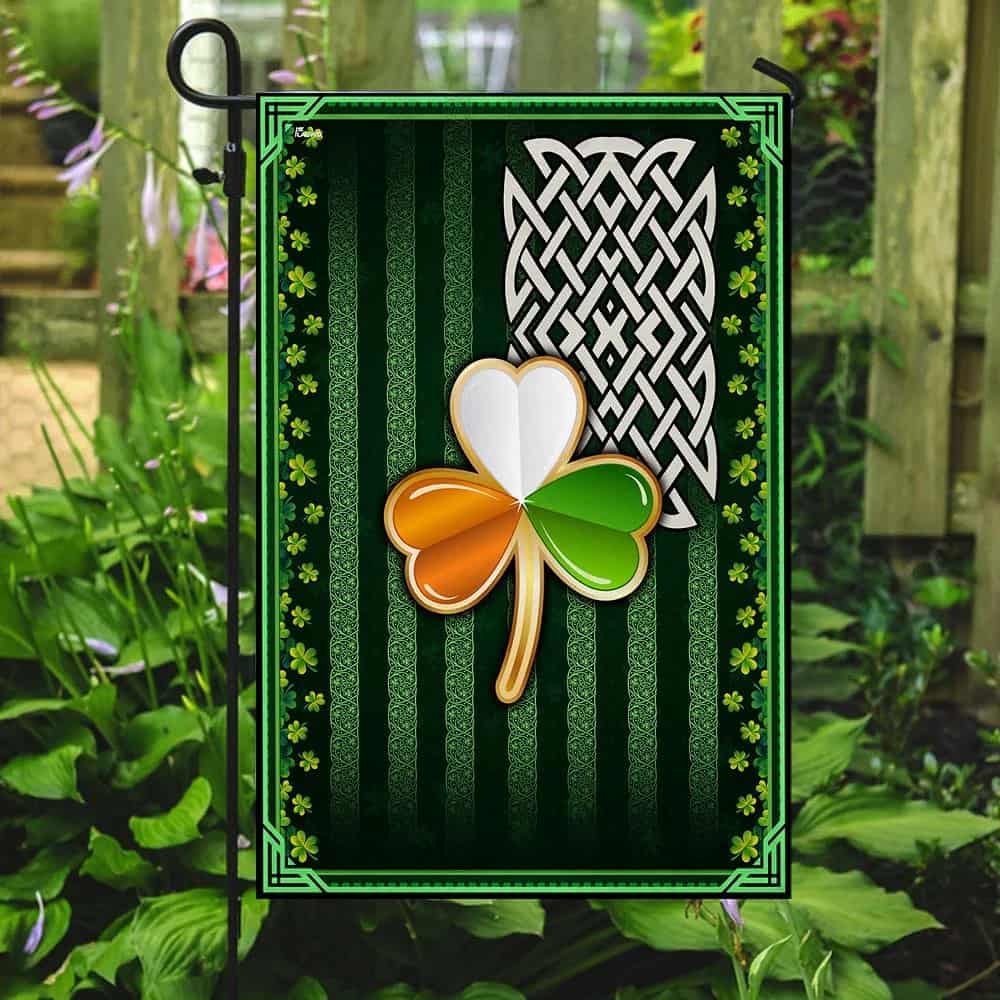 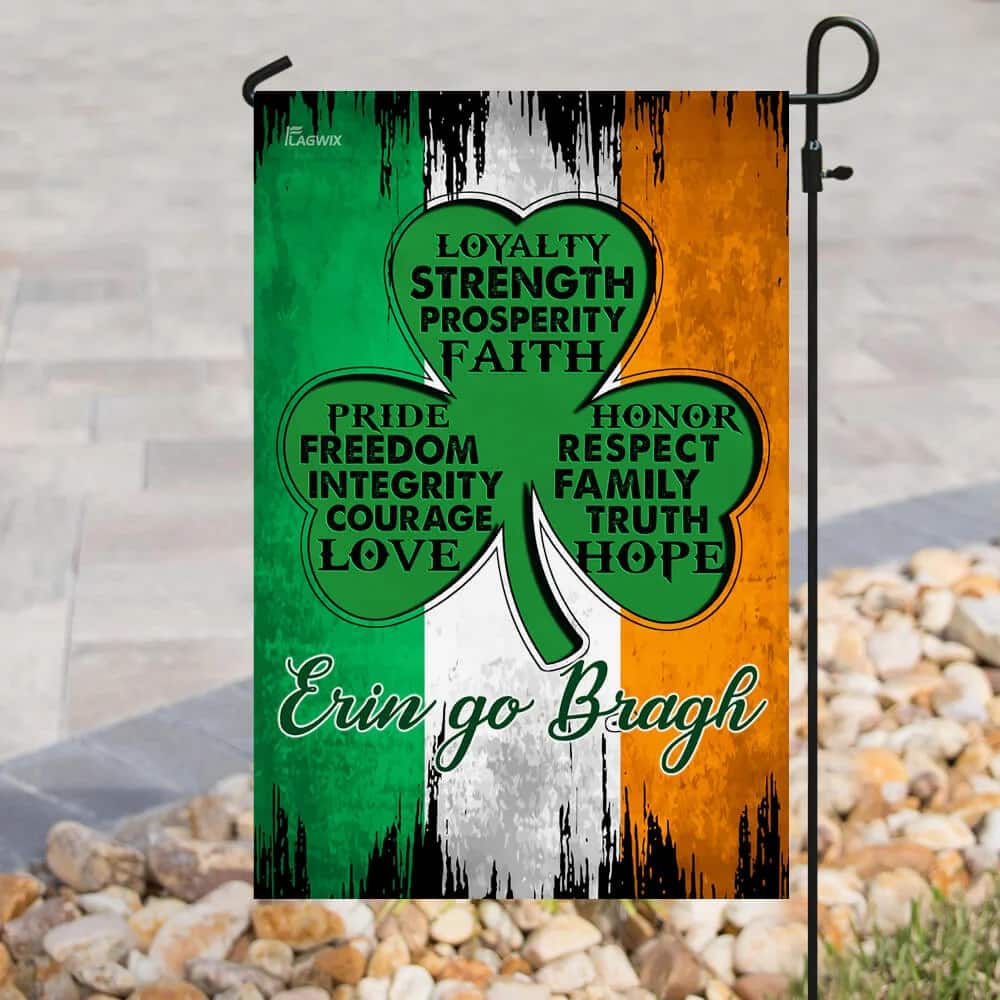 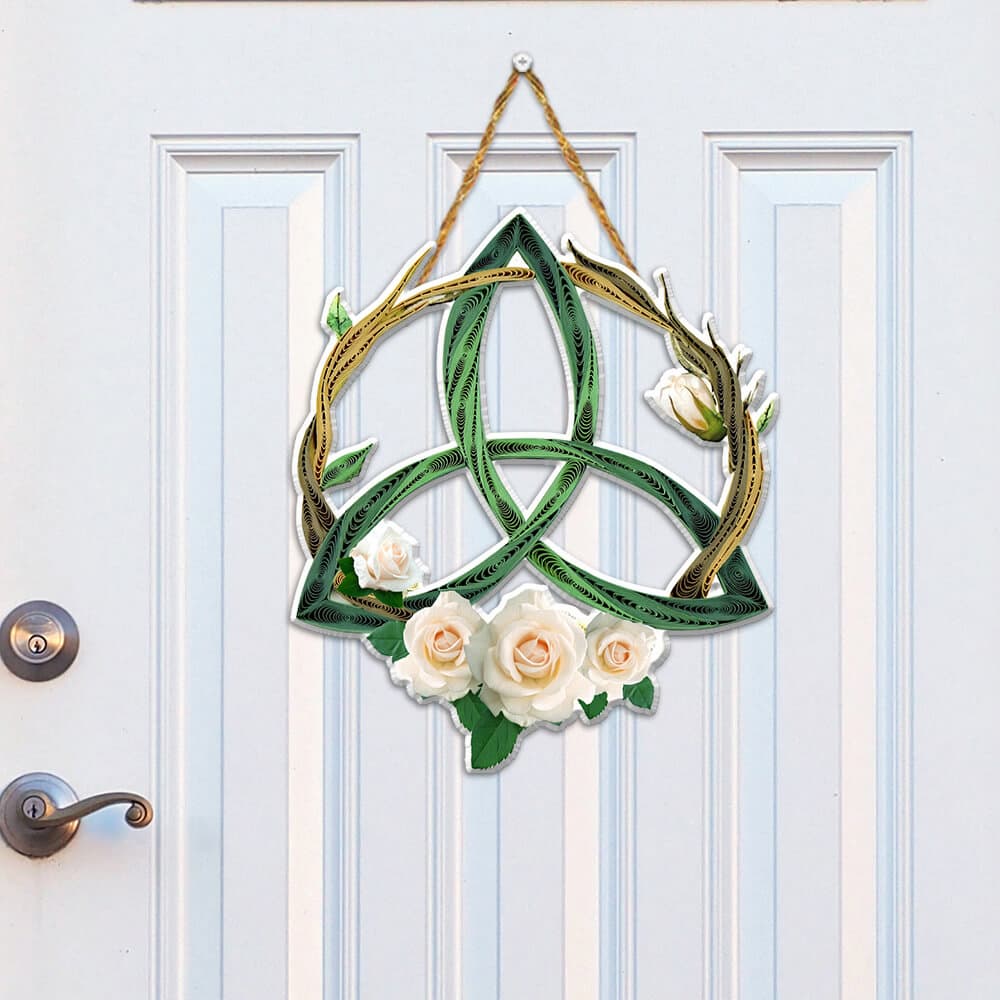 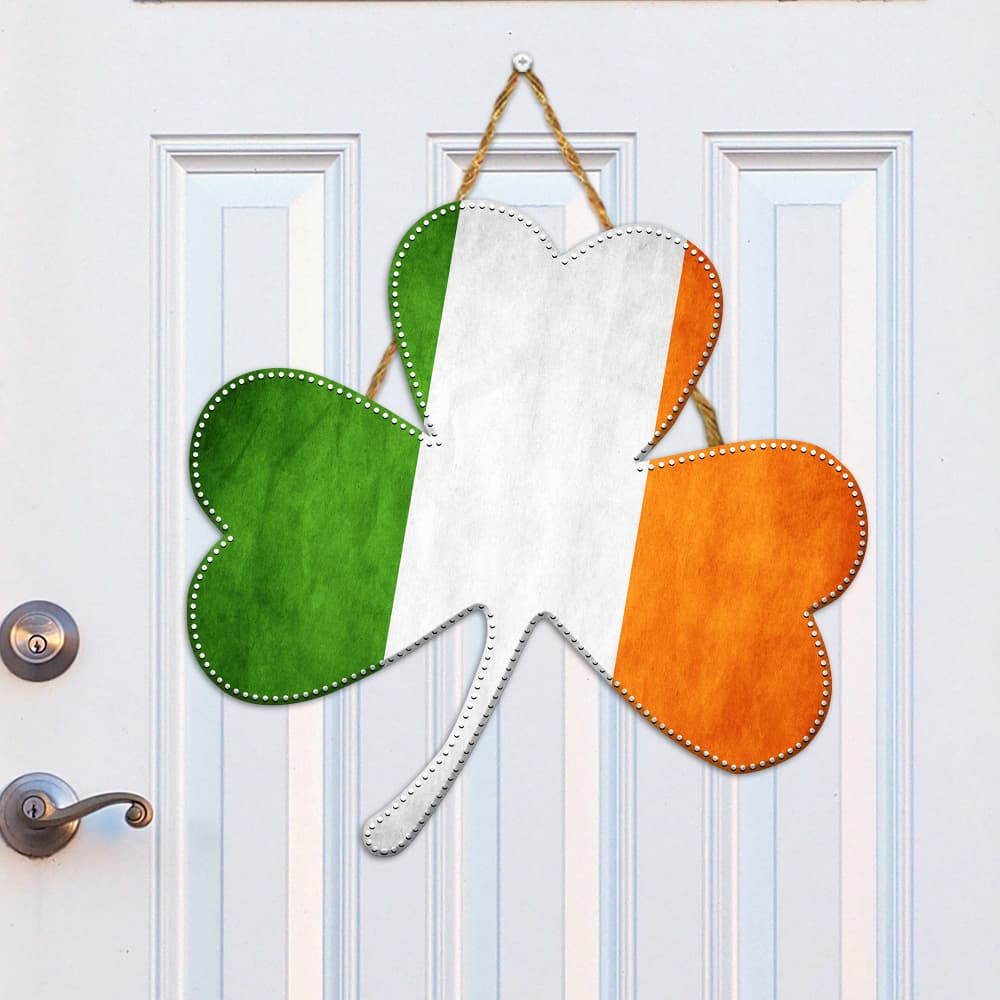 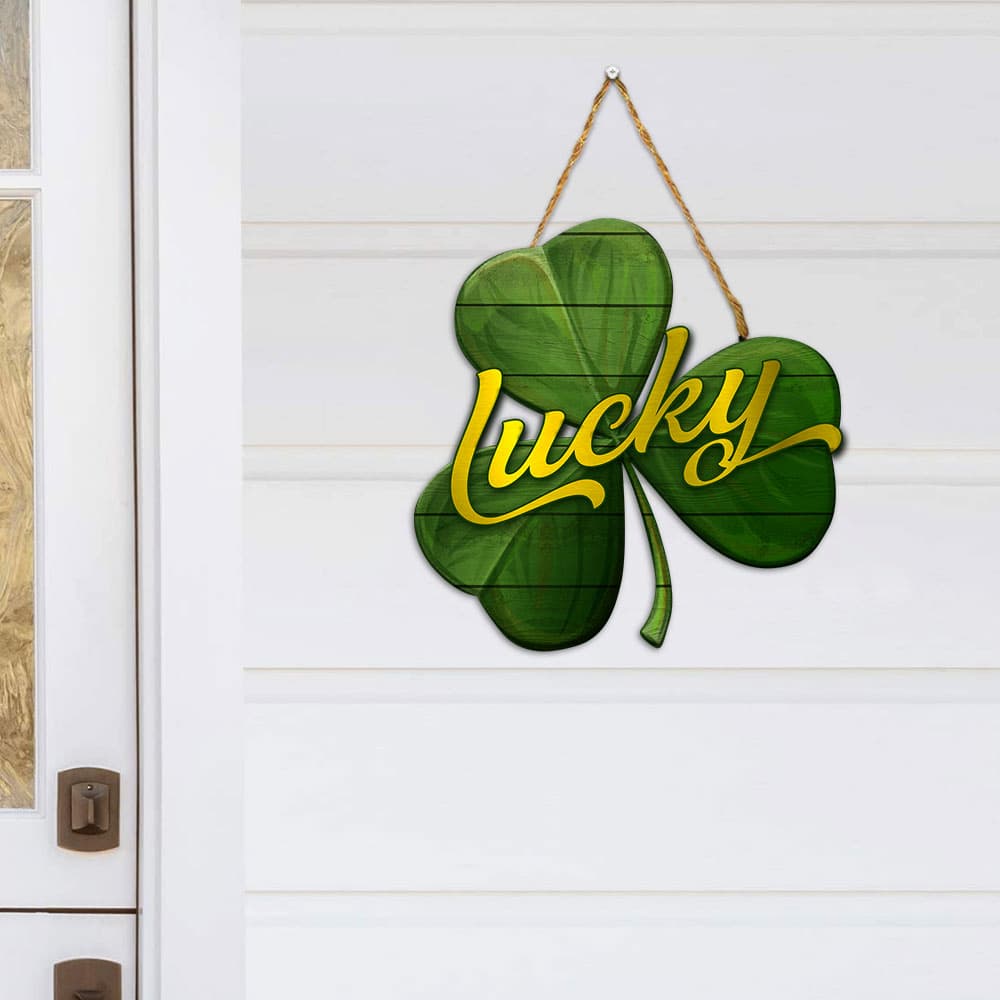 The Irish shamrock has been an important symbol in Ireland for centuries, particularly on St Patrick’s Day. So, if you are living in Ireland, or a random visitor, make sure to acknowledge one of these Celtic symbols so you can enjoy March 17 in a meaningful way!

Last but not least, please stay updated by subscribing to our Flagwix Blog‘s newsletter for new daily posts about decor tips and flag guidelines. Thank you!

Happy St. Patrick Day, and may the Irish clover bring good luck to you! 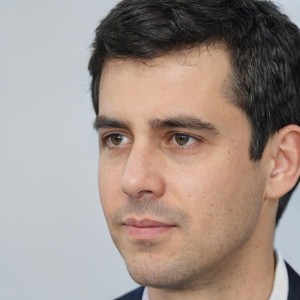