How To Make Halloween Decorations Based On Five Famous Halloween Symbols

Halloween is known as a time when the veil between life and death becomes thinnest. In this ghostly season, Westerners frequently decorate their homes, dress up, and throw parties in the most eerie manner possible. If you still don’t know how to make Halloween decorations that are reminiscent of the old Celtic Samhain festivals, we’ll show you how in this post. Specifically, you will learn how to carve a Jack O Lantern, make a Halloween witch hat, make black cat Halloween decorations, and much more based on popular Halloween symbols.

To begin, you should be aware that the Halloween symbols we are about to discuss are inextricably linked to the festival’s origins. Halloween originated from the Celts, who lived 2,000 years ago in what is now England, Ireland, and northern France. At the very start, this holiday was called Samhain, celebrated by the Irish in November 1st every year.

As we all know, the vast majority of Americans are non-native, with the majority of them being immigrants. A large number of the first immigrants to America came from England and the Celtic regions. So they were the ones who brought Halloween to America. The time to celebrate Halloween Day then has been changed to October 31 until now.

Since the 1800s, the horror folktales brought by the Celts have contributed significantly to the traditional value of Halloween in America. Simultaneously, characters and images have emerged from those creepy stories to become the most popular Halloween symbols up to the present day. 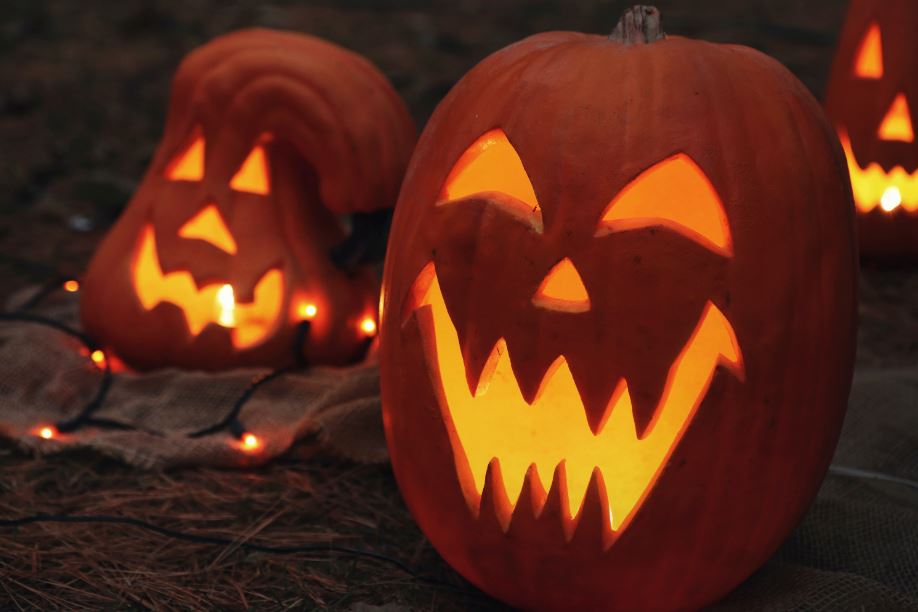 The origin of the Jack-O-Lantern can be traced back to an Irish folktale known as “Stingy Jack.” Jack is a stingy drunkard who often played tricks on people. He tried to deceive the devil one day but failed. His soul was then punished to be trapped between heaven and hell after he died, but the devil gave him a carved turnip with embers inside to light his path.

So, in the past, during Halloween in Ireland, Jack-O-Lantern was a turnip. However, as Irish culture merged with American culture, people began to substitute pumpkin for turnips when making Jack-O-Lantern because turnips are not so popular in America.

When it comes to Halloween, witches are thought to be the most mysterious and well-known creatures. The image of witches appears not only in many European folklores and history, but also in the Bible. Witches first appeared as healers from time immemorial; at the time, they were widely recognized and even cohabited with other commoners. 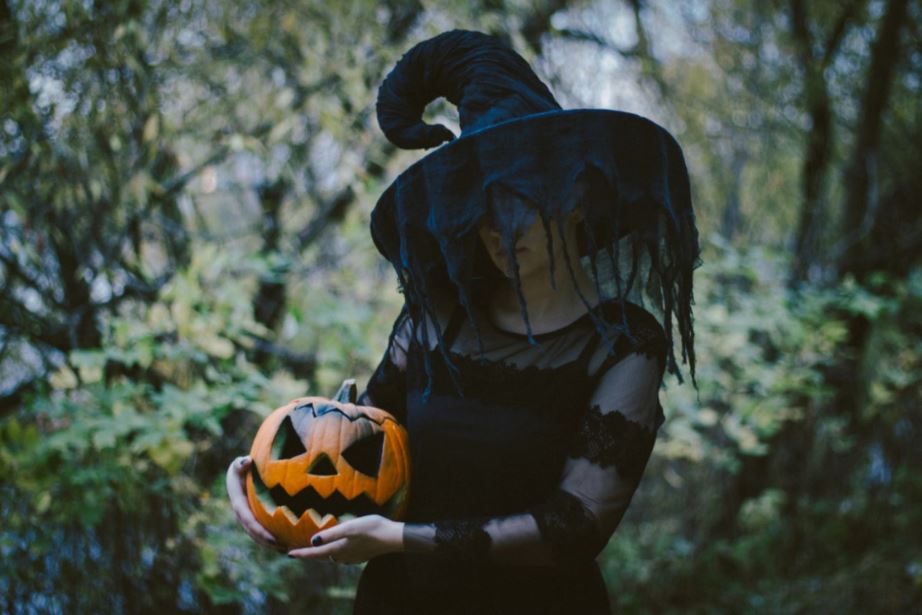 People believed that the presence of witches was sponsored by the Devil since the advent of Christianity and the dogmas from the Bible, which influenced the majority of people. As a result, witches were forced to be burned to death completely.

Because of that influential statement about witchcraft, to this day, people believed that witches represent a dark and somewhat blasphemous energy. That’s why the image of witches riding through the moon’s shadows has appeared a lot in Halloween to create some spine-chilling vibes. 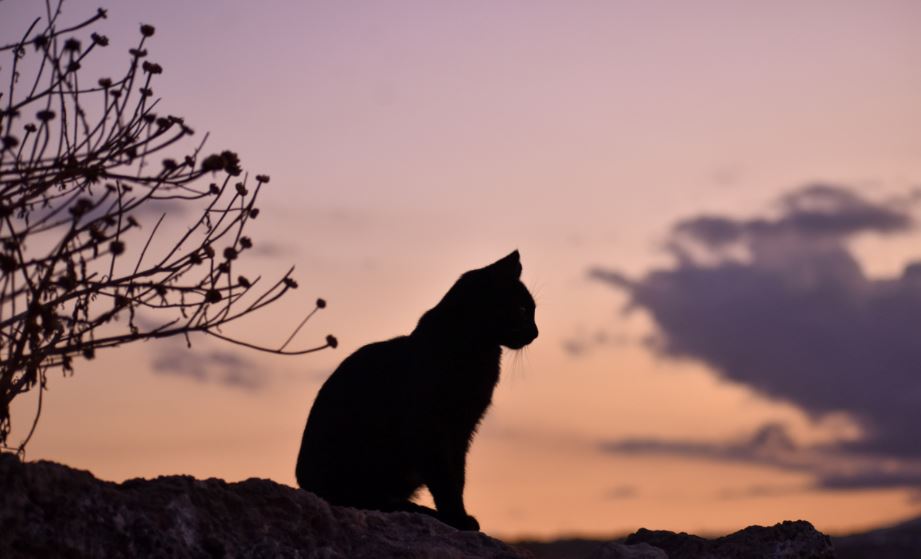 People used to believe that black cats brought misfortune and death to those who looked them in the eyes. Black cats are also thought to be witches’ familiars – “when a black cat is seen, the witch is nearby”. In some Western cultures, additionally, evil forces are thought to take the form of black cats in order to infiltrate people’s lives. Needless to say, those terrifying tales of black cats were enough to turn them into a mystical Halloween symbol for centuries. 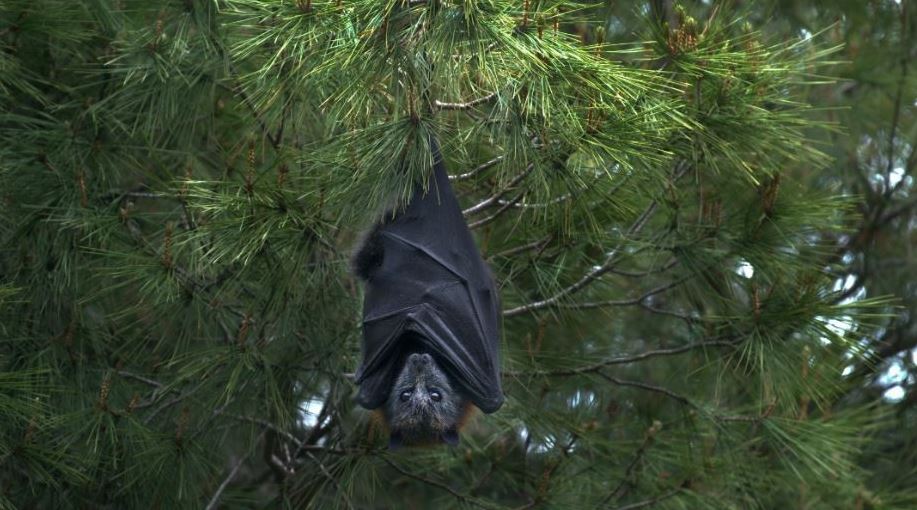 During Ireland’s annual Samhain festival, bats can be seen flying through the sky, creating a creepy atmosphere. People believe that the firebon at the festival attracts insects and bugs, which are the bats’ primary food source. Not to mention that bats are nocturnal animals associated with the image of vampires who specialize in sucking human blood in order to become immortal. Isn’t that creepy enough for Halloween? 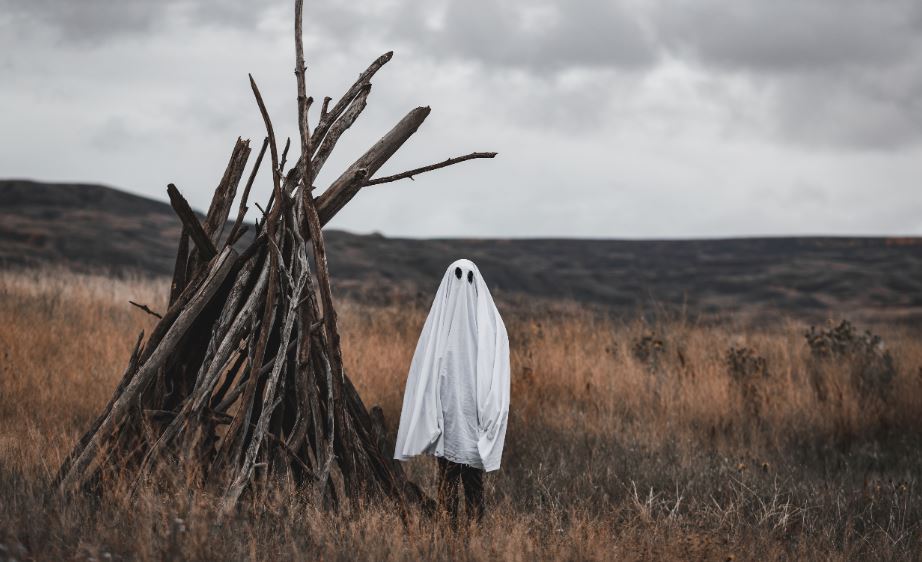 Both Irish Samhain and Christianity’s All Saints Day regard October 31st as a time to pray for and honor the spirits of the deceased. On this day, the gates between earth, hell, and heaven are opened, allowing loved ones’ spirits to return to their families. Some families leave food on their porches for wandering spirits to eat and then move on. Furthermore, during Halloween dinners, some people will place an extra plate on the table to honor a deceased loved one. As a result, icons of the dead and ghosts now represent these traditions and beliefs.

How To Make A Halloween Witch Hat

First, you need to have a black piece of construction paper to make a cone for your Halloween witch hat. Make sure to use a large sheet (e.g. 24″ x 36″) so that you can measure the perimeter of the cone base more easily to fit around your head. Besides, because you also make a brim later, when you cut a sheet to make this cone, ensure that you’ll still have enough construction paper to create the brim. After the cone is successfully shaped, cut short fringes along the base of the cone and fold out them with the aim to carry the brim afterward. 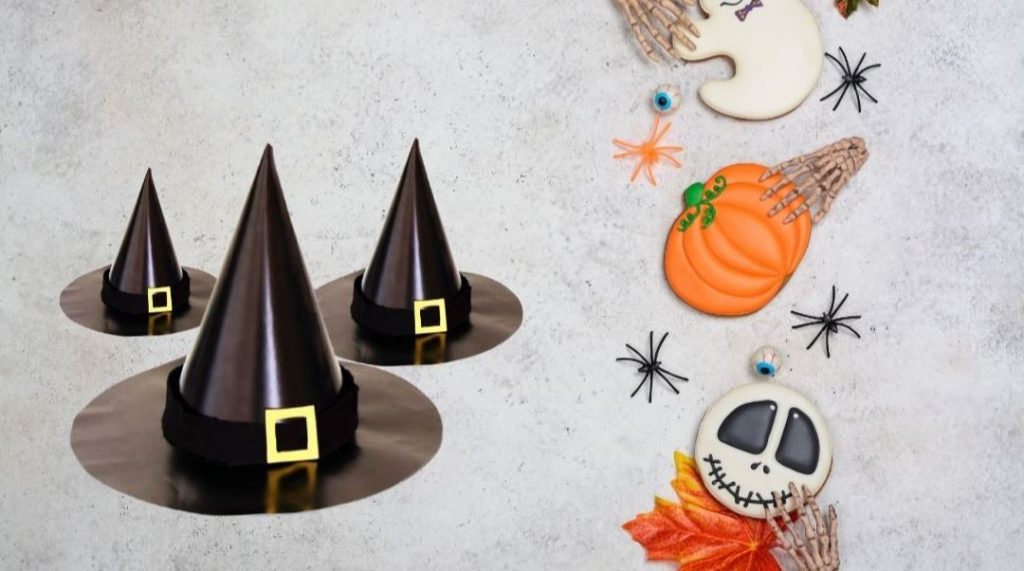 Next, make a brim with the remainder of the construction paper. Use a ruler to measure the inside diameter of the cone and a compass to draw a circle on the sheet with the specified diameter. Keep the compass point at the center of this circle and continue to draw another circle with a reasonably longer diameter. Cut out the inner circle and the large circle and we get a brim for you Halloween witch hat.

Once you have a brim, glue the brim and the bottom of the cone together, as long as the fringes are under the brim. To add some nice accents to this Halloween witch hat, you can glue a strip of black craft foam around the base of the cone and a yellow square-shaped buckle made out of this material as well at the front. Try your Halloween witch hat on your head once the glue dries!

How To Carve A Jack O Lantern

Of course, learning how to carve a Jack O Lantern requires you to have a pumpkin. To keep the orange stringy material inside the pumpkin from spilling on the table or the floor, do not forget to cover your working area with newspaper or a scrap of paper.

To begin, cut a hole around the stem at a 45-degree angle towards the center of the pumpkin, large enough to fit your hand through. Otherwise, the stem will fall into the pumpkin. To make the pumpkin look well-designed, just keep the stem. 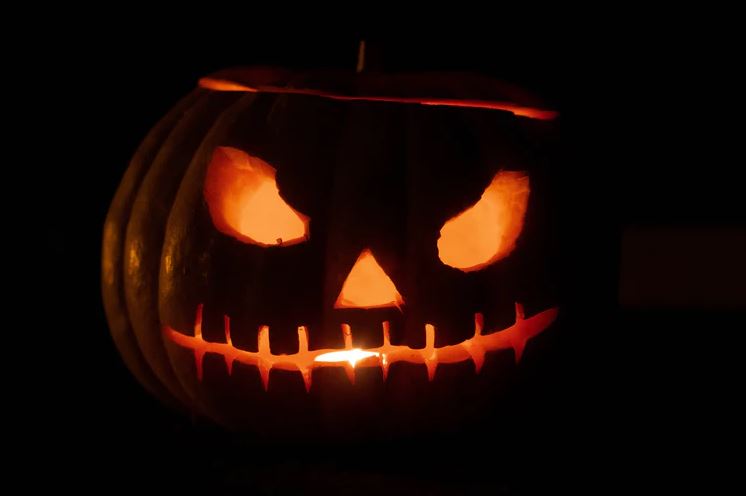 Next, scrape the pumpkin seeds and pulp out into a bowl with a sturdy spoon. Stretch the face for your pumpkin on the best-looking side, and cut along the chosen design with a small knife. Make sure to put every pieces taken out of the pumpkin into a bowl for later using for cooking.

Finally, light a candle, place it inside the pumpkin, and put the stem back on.

Once you know how to carve a Jack O Lantern, you can totally make some black cat Halloween decorations that will keep an eye out for your trick-or-treaters. That means black cats made entirely of pumpkins are possible! – Big thanks to Sunset that came up with this incredible Halloween idea.

The ingredients are simple to buy and cheap. All you need are pumpkins shaped like cats, such as a pear-shaped pumpkin or a pumpkin with a slightly curved shape for a cat’s body, and round pumpkins for a cat’s head. To make the pumpkin cats more enticing, gather black acrylic paint, candles, cucumbers for the cat’s tail, and black card stock for their ears. 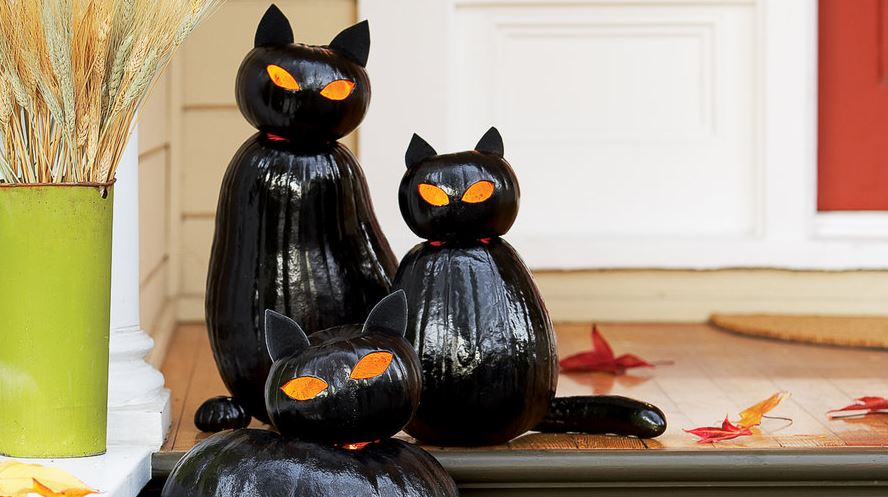 You don’t need to hollow out the pumpkin to make the cat’s body. We only carved the head because it is the face on which we will create our own design. Remember to flip the pumpkin (as the cat’s head) upside down before carving, because the base where the stem is inserted should be used to place on the cat’s body. In addition, it must be empty on the inside in order for a candle to fit.

After painting all of the pumpkins and cucumbers black, set them out in the sun to dry faster. Pound a few floral picks into the body if the head is wobbly. Measure the opening in the head and position the picks so that they fit just inside. Place a small dish containing a candle on top of the body and attach the head gently. Finally, rearrange the cat’s other small parts, such as the ears and tail, to create a perfect overall look on your front porch. Now,  have fun with your black cat Halloween decorations!

The main materials for making a handmade Halloween bat are a paper core, a medium and small sheet of black construction paper, and black acrylic paint. With just a few simple ingredients, you can make dozens of Halloween decorating bats to hang around your Halloween house and tree.

On a medium sheet of black construction paper, draw bat wings and cut them out along the lines. Next, make the bat’s eyes by cutting small circles from white paper and drawing the eyeballs directly with a black pen. Properly glue everything together and wait for the glue to dry. Finally, ready to decorate you house with the most unique Halloween bat decor.

Making a ghost Halloween costume is not difficult, but the important thing is to create accents for it as well as comfort for the person wearing it. The ingredients are simple and clear. An old white sheet, screen material, a piece of cardboard, black thread, and scissors are required. 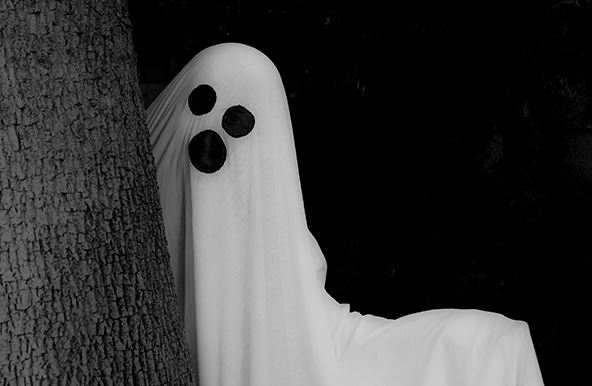 First, cut your sheet to the size of the wearer. Adults can use a king size sheet, but children should use a queen size sheet. Before you begin cutting, make sure to test the sheet at its original size. Next, draw and cut out the eyes and mouth on the cardboard. Pin them to the screen material and cut along the lines. Locate the sheet’s face and place the cut screen material there.

You might expect the next step to be to cut out the holes. However, if you do this, the sheet will deform as you sew the screen, resulting in a wrinkly ghost. So, just sew the eyes and mouth first on the sheet. Then, flip the sheet over and cut out the sheet material to make an opening for each eye and mouth. Finally, put it on and have a great Halloween!

Discover: Decoration for the entrance door

Halloween will become even more fun if you know how to turn them into Samhain nights from centuries ago. By creating Halloween decorations based on these classic Halloween symbols, we hope you have a spooky and exciting Halloween season.

You may also like: Flags for all occasions | Tips & Review

Our Favorite DIY Halloween Decorations for a Fun-Filled Celebration

Helpful Tips To Have A Spooky Decor With...

How To Decide On The Best Halloween Yard...

How To Make A Super Easy Halloween Doormat...