Want to know the true meaning of Autism colors and how they can represent Autistic people, especially during Autism Awareness Month? Read on!

If I had to exaggerate something yet still sounded accurate at some points, I would say there is nothing more complicated than the Autism Awareness colors.

Normally, when looking for a color representing something significant, it must be fixed and distinct. However, for the Autistic community, there have been several colors discussed and even debated until today.

The first understandable reason could be due to the nature of Autism. Autism is more akin to a Spectrum Disorder than a single form that works the same way in every autistic person. Another comes from the issue we are discussing at the bottom of this post. But first, have a look at the stories behind these colors and what they represent!

Origin and Meaning of The Autism Colors 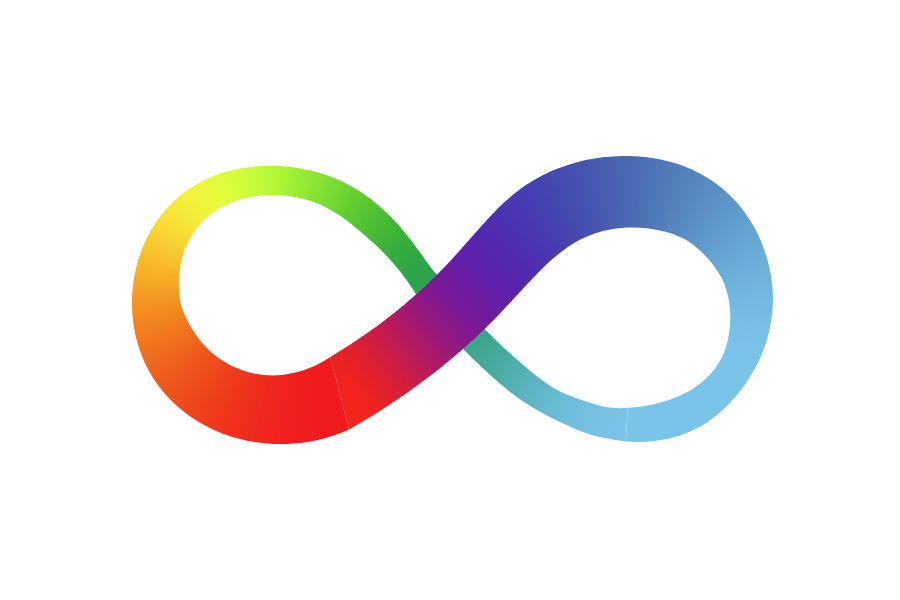 The rainbow infinity symbol is most commonly used because it represents the true essence of Autism (as a Spectrum Disorder) and its spirit (as part of the diverse human identities). This symbol can be seen commonly in most Autism Flag designs.

Although the Autistic community may use Rainbow (many hues at once) to represent them, some people still shy away from using that personally. The reason is quite understandable. They said rainbow stands for other spectrums they did not feel associated with.

When the community began using the rainbow as their Autism symbol is unknown. Yet, it is the most accepted one today. People love it since it makes them feel special, positive, and so involved in this life. And yes— that’s why they also choose it as a prominent symbol for Autistic Pride Day.

Blue became the color of autism because it was chosen by Autism Speaks, an organization working on many Autism Awareness projects in the U.S. It also matches the color of a puzzle piece, the most recognizable autism symbol.

According to Kerry Magro, an international motivational speaker on the autism spectrum and also diagnosed with Autism, Blue made him feel just calm. To him, it signifies peace and honesty. In fact, Blue is a great color for meditation and can be helpful at reducing anxiety levels. That’s why many people affected by Autism can choose this color for themselves. Despite such a beautiful message, the origin of Blue comes from a misconception about ASD (Autism Spectrum Disorder). At the time, people chose Blue (representing boys) because they believed this disorder occurs mostly in males rather than females, which is not true. For that reason, most people with Autism today no longer refer themselves to this color.

Another reason making this color no more sit for the Autism community comes with the Light It Up Blue Campaign by Autism Speaks. Those in the community argue that the campaign goes against the core values that shape Autism rather than actually helping them. One of the worst acts from the organization is when they describe Autism as a demon devouring individuals with the disorder. Besides, there are many more similar reasons that form some of the controversies that we are covering in the last section of this post.

In 2015, Red was put on the table to against Blue for the reason I just mentioned above. In addition, the neurodiversity movement also uses red as a prominent representation. Red means love and passion. These are two factors that people with autism are often mistaken for as incapable of having. This color really empowers the Autistic for proving that they are different yet absolutely matter in life. Although Gold is rare compared to the other colors on this list, it means a lot for the evolution from Autism Awareness to Autism Acceptance. Gold means enlightenment, intelligence, and optimism.

For few families with autistic members, it’s common to wear yellow or orange jewelry on April 2. The bright gold shades help draw attention and cause others to inquire about autism, which can open up conversations. That should make others know about how autistic individuals are treated in our society and help promote positive understanding toward them. As for the final goal, these conversations are hoped to lead to something greater: Acceptance.

Gold has taken on additional meanings since then. And yes‒ its role in aiding efforts to bring autism awareness may have increased its status. Purple is also one of the colors to represent Autism, yet, it seems more common in the United Kingdom. That is because the U.K’s National Autistic Society has chosen it as their striking color for Autism Awareness.

Purple means scarcity and royalty. Here, however, we should talk only about scarcity, since royalty is more likely to be associated with the U.K’s NAS itself than Autism.

The meaning of purple as rareness can have two sides of explanation about the autistic. One is positive, while the other can be negative. Specifically, it tells that people must stop believing that Autism is a disease just because it is different from the majority. On the other side, which is negative, the rareness makes autistic individuals less prominent in our society and causes consequences.

Controversy Over The Autism Awareness Month Color (Regarding The Autism Speaks)

To be clear, Blue is the only color that gets involved in the controversy over Autism Speaks. As I have said above, Autism Speaks is an organization established to raise awareness and acceptance toward Autistics. One of its huge and famous projects is the Light It Up Blue Campaign, built up to raise money and support for Autistics and their families. It’s a “non-profit” program from a “non-profit” organization; however, it has not helped at all.

According to Kaylene, mom of an Autistic child, you should not support Light It Up Blue campaign by Autism Speaks for these reasons:

As her words, there are five reasons not to trust this organization:

Even the Autistic Self Advocacy Network (ASAN) says, “Autism Speaks has no significant autistic leadership and has never been aligned with the needs and priorities of the autistic community.”

So, even if the blue color has no guilts (it is just a color) and sometimes reflects good things, using it without acknowledging that incredible story can have impactful consequences. Be careful with what and who you are supposed to trust!

The origin and meaning of the Autism colors are interesting and worth knowing about. To some extent, they can raise Autism awareness to those having no idea what ASD is and even change Awareness into Acceptance.

If you are interested in making a difference, have a look at our Autism Flag Selection, get your favorite one and fly it publicly. We believe such a little act can impact people!

Moreover, please remember that the Autistic needs more than that. If you are capable of donating to them, check out the ASAN.

Enjoy this post? Share it with your friends or on your social media to let more people know what you found helpful! Thank you for reading!

The Power of World Cancer Day: Uniting the...